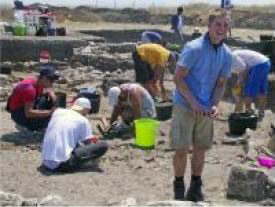 The Molyvoti, Thrace, Archaeological Project (MTAP), a Greek-American collaboration co-directed by Nathan Arrington (Princeton University), Marina Tasiklaki, Domna Tersopoulou. and Thomas Tartaron (Penn, Classical Studies as survey director), investigates an ancient trading port located on the Thracian Sea between ancient Abdera and Maroneia. The project, which began in 2013, aims to ascertain the identity, form, and chronology of the city on the Molyvoti Peninsula; to explore its various roles in regional communication and exchange networks; and to assess its evolving relationship with the landscape and local populations. A particular interest is the formation and evolution of an emporion (trading port) in its changing economic and cultural contexts, taking into consideration regional dynamics and constraints as well as individual agency. Excavation and survey of the city and its hinterland on the Molyvoti Peninsula—located between east and west, sea and land—promises to make a substantial contribution to our understanding of settlement, trade, politics, and society in the Archaic, Classical, Hellenistic, and Roman periods (6th century BCE to 6th century CE).